Mr. Gore was the 45th vice president of the United States.

Things take longer to happen than you think they will, but then they happen much faster than you thought they could.

The destructive impacts of the climate crisis are now following the trajectory of that economics maxim as horrors long predicted by scientists are becoming realities.

More destructive Category 5 hurricanes are developing, monster fires ignite and burn on every continent but Antarctica, ice is melting in large amounts there and in Greenland, and accelerating sea-level rise now threatens low-lying cities and island nations.

Worsening droughts and biblical deluges are reducing food production and displacing millions of people. Record-high temperatures threaten to render areas of the Middle East and the Persian Gulf, North Africa and South Asia uninhabitable. Growing migrations of climate refugees are destabilizing nations. A sixth great extinction could extinguish half the species on earth.

Finally people are recognizing that the climate is changing, and the consequences are worsening much faster than most thought was possible. A record 72 percent of Americans polled say that the weather is growing more extreme. And yet every day we still emit more than 140 million tons of global warming pollution worldwide into the atmosphere, according to the Intergovernmental Panel on Climate Change. I often echo the point made by the climate scientist James Hansen: The accumulation of carbon dioxide, methane and other greenhouse gases — some of which will envelop the planet for hundreds and possibly thousands of years — is now trapping as much extra energy daily as 500,000 Hiroshima-class atomic bombs would release every 24 hours.

This is the crisis we face.

Now we need to ask ourselves: Are we really helpless and unwilling to respond to the gravest threat faced by civilization? Is it time, as some have begun to counsel, to despair, surrender and focus on “adapting” to the progressive loss of the conditions that have supported the flourishing of humanity? Are we really moral cowards, easily manipulated into lethargic complacency by the huge continuing effort to deceive us into ignoring what we see with our own eyes?

More damage and losses are inevitable, no matter what we do, because carbon dioxide remains for so long in the atmosphere. So we will have to do our best to adapt to unwelcome changes. But we still retain the ability to avoid truly catastrophic, civilization-ending consequences if we act quickly. 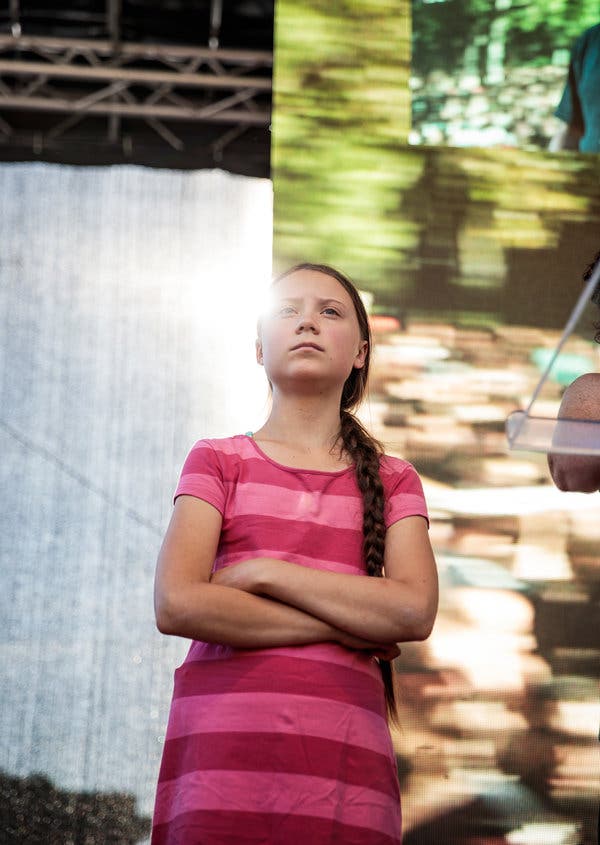 This is our generation’s life-or-death challenge. It is Thermopylae, Agincourt, Trafalgar, Lexington and Concord, Dunkirk, Pearl Harbor, the Battle of the Bulge, Midway and Sept. 11. At moments of such crisis, the United States and the world have to be mobilized, and before we can be mobilized, we have to be inspired to believe the battle can be won. Is it really too much to ask now that politicians summon the courage to do what most all of them already know is necessary?

We have the technology we need. That economic maxim about slow-fast phenomena, first articulated by the M.I.T. economist Rudiger Dornbusch and known as Dornbusch’s Law, also explains the tsunami of technological and economic change that has given us tools to sharply reduce global warming pollution much faster than we thought was possible only a short time ago. For example, according to the research group Bloomberg New Energy Finance, as recently as 2014 — a year before the Paris climate agreement was reached — electricity from solar and wind was cheaper than new coal and gas plants in probably 1 percent of the world. Today, only five years later, solar and wind provide the cheapest sources of new electricity in two-thirds of the world. Within five more years, these sources are expected to provide the cheapest new electricity in the entire world. And in 10 years, solar and wind electricity will be cheaper nearly everywhere than the electricity that existing fossil fuel plants will be able to provide.

This transition is already unfolding in the largest economies. Consider the progress made by the world’s top four emitters of greenhouse gases. Last year, solar and wind represented 88 percent of the new electricity capacity installed in the 28 nations of the European Union, 65 percent in India, 53 percent in China and 49 percent in the United States.

This year, several American utilities have announced plans to close existing natural gas and coal generating plants — some with decades of useful life remaining — to replace their output with cheaper electricity from wind and solar farms connected to ever-cheaper battery storage. As the chief executive of the Northern Indiana Public Service Company said recently, “The surprise was how dramatically the renewables and storage proposals beat natural gas.” He added, “I couldn’t have predicted this five years ago.”

Today, the fastest-growing occupation in the United States is solar installer, according to the Bureau of Labor Statistics, and it has exceeded average job growth sixfold in the last five years. The second-fastest growing job: wind turbine service technician.

In Australia, a high-tech entrepreneur, Mike Cannon-Brookes, is reportedly planning to sell renewable electricity generated in the Northern Territories to South Asian cities over a long-distance undersea cable. Globally, close to 200 of the world’s largest companies have announced commitments to use 100 percent renewable energy, and several have already reached that goal. A growing number of cities, states and provinces have pledged to do the same.

The number of electric vehicles on the road has increased by 450 percent in the past four years, and several automobile manufacturers are shifting research and development spending away from internal combustion vehicles, because the cost-reduction curve for E.V.s is expected to soon drop the cost of the vehicle well below comparable gasoline and diesel models’. Over half of all buses in the world will be electric within the next five years, a majority in China, according to some market experts. At least 16 nations have set targets to phase out internal combustion engine vehicles.

More broadly, the evidence now indicates that we are in the early stages of a sustainability revolution that will achieve the magnitude of the Industrial Revolution and the speed of the digital revolution, made possible by new digital tools. To pick one example, Google has reduced the amount of electricity required to cool its enormous server farms by 40 percent using state-of-the-art artificial intelligence. No new hardware was required. Sustainable alternatives to existing methods of industrial production are being pursued by more and more companies.

A farmer-led regenerative agriculture revolution that is also underway avoids plowing and focuses on building soil health by sequestering carbon dioxide in the ground, making the land more fertile. The farmers are using rotational grazing and planting trees and diverse cover crops to enrich soil and protect against erosion.

And so far, the best available technology for pulling carbon dioxide from the air is something called a tree. That’s why many nations are starting ambitious tree planting efforts. Ethiopia recently reported planting 353 million trees in 12 hours, nearly double the goal of 200 million. Scientists calculate that we have enough available land worldwide to plant between one trillion and one and a half trillion trees. To protect our vast but dwindling forests, new satellites and digital tools can now monitor deforestation virtually tree by tree, so corporations will know if the products they buy were grown on razed or burned forestland.

Yet for all this promise, here is another hard truth: All of these efforts together will not be enough to reduce greenhouse gas emissions sufficiently without significant policy changes. And right now, we don’t have the right policies because the wrong policymakers are in charge. We need to end the mammoth taxpayer-funded subsidies that encourage the continued burning of fossil fuels. We need to place a direct or indirect price on carbon pollution to encourage the use of cheaper, sustainable alternatives that are already out there. New laws and regulations may be needed as well to encourage innovation and force more rapid reductions in emissions.

The political reconfiguration we have desperately needed has been excruciatingly slow in coming, but we now seem to be at an inflection point, when political change begins to unroll more rapidly than we thought was possible. It’s Dornbusch’s Law, brought to politics.

The people, in their true function as the sovereign power, are quickly understanding the truth of this crisis, and they are the ones who must act, especially because the president is not on speaking terms with the truth and seems well beyond the reach of reason.

This will require a ferocious attack on the complacency, complicity, duplicity and mendacity of those in Congress who have paid for their careers by surrendering their votes and judgment to powerful special interests that are sacrificing the planet for their greed. To address the climate crisis, we must address the democracy crisis so that the people themselves can reclaim control of their destiny.

As has often been the case in successful political revolutions, young people have taken up the gauntlet with inspiring passion. Greta Thunberg has stirred millions as the school strike movement she began in Sweden spreads to many countries. The Sunrise Movement, the Extinction Rebellion, Zero Hour and other youth-led movements are gathering momentum daily. On Friday, hundreds of thousands of people around the world were marching and gathering to call for action on climate change. Employees of many corporations are aggressively demanding that their employers take action to help save the climate balance. 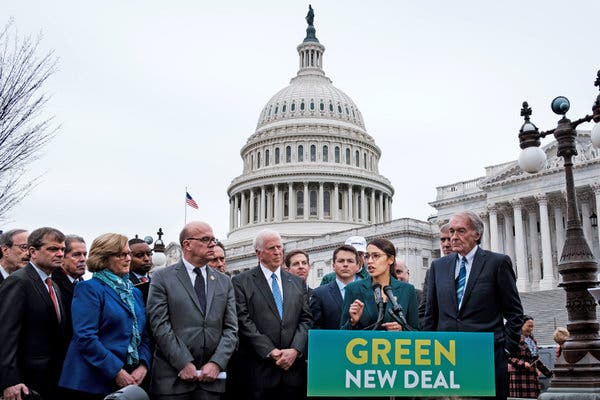 The “blue wave” that gave Democrats control of the House in last year’s midterm elections was fueled in part by concern about climate. The Green New Deal, introduced by Representative Alexandria Ocasio-Cortez of New York and Senator Edward J. Markey of Massachusetts, ties solutions to the climate crisis to environmental justice and a “just transition” that will create millions of well-paying jobs. This effort has won support from many Americans, just as the nuclear freeze movement of the early 1980s attracted wide approval and helped pave the way for an arms control agreement between President Ronald Reagan and Mikhail Gorbachev, the leader of the Soviet Union.

Virtually all of this year’s Democratic presidential candidates are making the climate a top priority. Many have released impressive and detailed plans that would have been unthinkable only a few years ago. A CNN poll in April found that the climate crisis was the No. 1 concern of Democrats who are registered to vote. Another recent poll showed that a record 79 percent of American adults and 86 percent of teenagers believe, finally, that the climate crisis is caused by human activity, and, even more significantly, so do 60 percent of Republicans. Americans’ disapproval of President Trump’s approach to the climate was higher, at 67 percent, than on any other issue.

College Republicans at dozens of schools have called on the Republican National Committee to support a carbon tax and have loudly warned the party that it will forfeit support from younger voters if it does not. Another recent poll shows that 67 percent of millennial Republican voters say their party needs to do more on climate

Next year’s election is the crucial test of the nation’s commitment to addressing this crisis, and it is worth remembering that on the day after the 2020 election, the terms of the Paris climate accord will permit the United States to withdraw from it. We cannot allow that to happen. Political will is a renewable resource and must be summoned in this fight. The American people are sovereign, and I am hopeful that they are preparing to issue a command on the climate to those who purport to represent them: “Lead, follow, or get out of the way.”

Al Gore shared the 2007 Nobel Peace Prize with the Intergovernmental Panel on Climate Change for his work to slow global warming. He is the author of, among other books, “An Inconvenient Truth: The Crisis of Global Warming.”

350 Mass for a Better Future